Been there & done that.Being over 1 year at IT just made me realize how I have learnt the rules of the game.So here I am, sitting in my office, on one of those days when Manager is working-'hard'-from-home & the lead goes home early & I have nothing better to do than try the new Firefox version on my system (How Geeky !I know, but then this is after the nth round around the office building & cafeteria with another friend having a similar day & running outta games on Fb & annoying people & their timelines at twitter :P)

No doubt, Firefox had to come up soon with its newer version after the Browser cold war was almost declared with Chrome release & no doubt, the 4.0 version, scheduled to be released this November is no less attractive & efficient.Start with a fresh UI, which is so like a merge of Firefox, the original & latest Chrome.With many more similarities as chrome, like easier tabs in terms of readability & good to work on add-ons with there better management,good to sound the HD Video feature (which surely, I avoided to explore here) , Firefox surely it is eying for more Guinness World Records with its next release ! 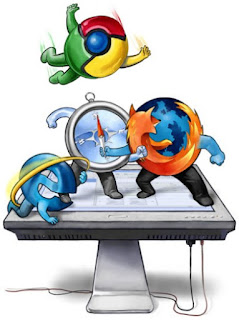 Image from : http://www.viritech.com/firefox-4-0-vs-google-chrome-browser.html
Blah Blah by Aakanksha at 6:39 PM