World has enough important issues to be pondered upon, there are interesting movies & many thought provoking books to be talked about & discussed in blogs that people would be more interested to read about like some knowledgeable stuff but the problem with “My Galaxy” lies in the fact that it belongs to the galaxian which has a misconception that anyone’s life can be another fiction ready to be written.

I am not weak hearted. Now I don’t say I was born like that, but I evolved, adapted, matured & many such terms did happen at hostel as they usually do & I now strictly do not fall under the category of people who are scared to sleep in dark or afraid to go alone star gazing in a lonely hostel terrace with creepy, imaginary background music & various other such types I could fortunately encounter here. Though I admit, I have never watched a certified scary movie & neither do I intend to.

However, many things did happen recently, which made me reconsider my above claimed attributes.

Like an incident, all to be blamed to my intuitive power, which I now strongly believe I have in plenty..!! So, here I was lazily lying on my bed, engrossed in “The Kite Runner”, just another weekend when my room has turned to single-Seater again, courtesy my roomie. I, out of nowhere thought of going to the water cooler & as soon as I opened the door, I could find 2 of the known faces standing in front, about to knock, now since it was around 2 am , & not a very obvious scene, a natural scream followed by a couple of screams from their side too (of course they were ignorant of my intuitive power, till this) enough to have woken up people around and no doubt leaving me shaky.

Secondly, Lappie started to give some warning signals & indicated that it needed some back up. Now, the beauty of the word ‘imminent’ used in the warning did kinda make me seriously think about if something is wrong.It turned out to be okey though. However, I couldn’t keep myself from thinking about “Back Up” as when applied to our lives. I mean, living life on the edge is something which happens & looks good only in the movies. We all need to create some plan & than a back up. May be that’s why humans are never said to be satisfied, it’s always what’s next in our lives back up to a back up plan, a job offer than a PG plan, its execution plan & than a further back up in case of any failure, & another back up for dealing with its consequences. Any case, whatever the plan be & whatever be the back up, life must be dynamic enough as E M Foster quoted & it appeared this Sunday in STOI: “We must be willing to let go of the life we have planned, so as to have the life waiting for us.” And believe me as it turns out there is a planner for all of us better than us but than some body also said that “wisdom comes to us when it can no longer do any good..”

Once Upon A Time

Whenever he happened to see any article about solitude, he knew that it had to be something really meaningful & definitely related to him. He had randomly read this in one of those many self analysis (his types) articles in some Sunday newspaper supplement, that there are 2 kinds of people,

One who know their loneliness well & actually enjoy it. While the other category involved the not-so-lucky souls which could not accept their loneliness & are simply not comfortable with their own company, as to put in his way. He started with the second category & gradually ended being the first kind as he became friends with himself. It was so easier & peaceful for him now; after all such transforming journeys are not easy to undertake & are usually the forced ones, blame it all to the circumstances. He didn’t find himself weird anymore & realized that when one reaches such a deeper level of understanding, the complexities simple out themselves. In technical terms he now understood a wider spectral range of frequencies & that it happily matched with those of many around him. His solitude turned out to be a great teacher, as it usually happens. So, is this what we hear about turning your weakness into your strength?

In fact, now people enjoyed his company, after all every one liked being with someone who could actually listen to them.

Seems like life is an opportunist & never misses any chance of being ironic.

PS: To all my silent readers; fuhget it, this ain’t for you.

Email ThisBlogThis!Share to TwitterShare to FacebookShare to Pinterest
Labels: Philosophical Me 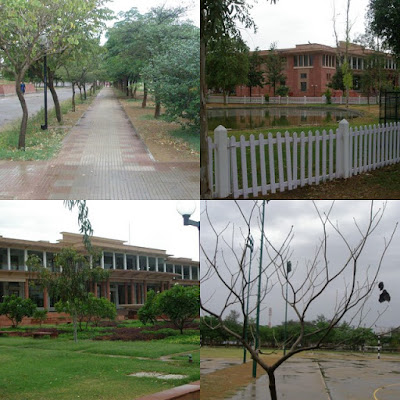 It is only when you miss something, you realize its importance.I never thought, the campus could look so scenic.

Email ThisBlogThis!Share to TwitterShare to FacebookShare to Pinterest
Labels: Abstract, Words not enough

I can never run out of a title.

So the last two posts clearly show I have been kinda treating my blog as if it’s some subject assignment forcibly given & am completing it just for the sake of formality so that I don’t slip into the category of i-am-too-busy-to-blog.As a matter of fact, i am surrounded by many assignments right now, blame it all to the wrong side of a semester.Though, lotsa events kept happening which could be said as “The Blog Material “& laughed about like (to be precise)

* discovering a great friend in an old friend, which believe me happens to be one of the sweetest experiences of life, creating that feel good factor very unlike finding a relationship with a stranger but some one you already know well, just a turn of time (or maybe that million dollar fortune I won last week is no more a secret..!)

*getting caught by the HOD as I tried to get out of the class that too a locked one in an unconventional way, through window to add and its consequences for those inexperienced people who were never that lucky to have such amazing memory to cherish.(sarcasm is my long left virtue)

*how the attendant almost spoiled my plans of going back home again by the same train after the Holi breaks when he woke me up remarking we are almost in the city.Now, I do sleep a lot while traveling but this was extreme.

* getting addicted as if life consists of only 2 things.
Reading as in the 2 books on my shelf: 1.The Kite Runner 2.The Housekeeper ,reading an ebook, -The Fountainhead,reading the noticeboard, reading people's mind, reading in the class when you aren't supposed, reading blogs & more blogs and no prize for guessing that if i am not reading, there is definitely some movie playing on, addiction number 2.

* enjoying a rainy day in the month of april !! in this desert!! ,with everything around turning as scenic as what could be anyone's desktop wallpaper ,campus & the desert behind my hostel looked so fresh & clean & the cool breeze so much like making you feel like being in Marine Drive, & cozy bed with an interesting novel & coffee around but story changed a bit & i ended up attending my scheduled classes realizing Global warming & the complete issue about the weather change is the only truth.

Email ThisBlogThis!Share to TwitterShare to FacebookShare to Pinterest
Labels: In General, Life Diary

Now B Day too has a meaning

Birthdate: September 2
You're so intuitive, it's like you have a sixth, seventh, and eighth sense. (wow..!!)
You connect with others freely and easily - and you tend to have many best friends.
Warm and caring, it's hard for you to close your heart to anyone.
Affection is like air for you - you need to give and receive it to survive.

Your strength: Your universal compassion

Your weakness: Your unpredictable mood swings

Funny..!! Check out yours

Blah Blah by Aakanksha at 7:22 PM No comments: