Survival of the fittest

When Charles Darwin used this term (it was actually coined by Herbert Spencer though), explaining nature's evolution from a single-celled Amoeba to such a highly complex species called Humans, he not only explained Nature's arcanum but one of the most Universal Laws which applies not just to evolution but comes down to basic simple things of life, a simple day, a job offer, a good idea, a startup or be it a big MNC.
Survival of the fittest, as the phrase finder describes as " The Idea that species adapt & change by natural selection with the best suited mutations becoming dominant" never meant that the best wins but it can be easily comprehended to a simple logic that whoever, understands the scenario, and acts accordingly by adapting himself/ his company to the same, not only wins the game but also takes the best ahead to evolve to the next level. The smartest instance I can quote here is of the FB Founder Mark Zuckerberg. The way he shaped his now most popular, an addiction-to-many social networking site makes him one of the smartest people on the planet.That is even after many controversies surrounding him.This shows that its not only the best talent which won but also the one which fitted the need of the hour the most. 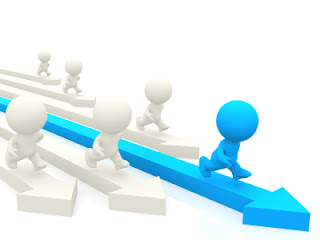 A company would differentiate itself from the other by adapting to a market demand, faster than its competitor & definitely under a group of leaders who would think a step ahead which is no rocket-science though impossible without an in-depth domain knowledge.So now you know when a restaurant down the street runs much better than the other, it must have simply focused on these :
Blah Blah by Aakanksha at 2:33 AM

Email ThisBlogThis!Share to TwitterShare to FacebookShare to Pinterest
Labels: AWA, Corporate Life, My Take, Self MOtivation