You may say all you want, to Chetan Bhagat and "his-kind-of" writings but I think a good thing which happened during/after these MBA turned writers started penning down his fiction was that there were many others and it caught our attention. So apart from the likes of Vikram Seth, Arundhati Roy and not a zilch comparison with The R.K.Narayanan, there came a series of writers in Indian Fiction including the ones which beautifully wove fiction around the elusive Indian Mythology. The surreal images created in our minds by B R Chopra during those growing up as 90s kid were given new imaginations. It happened so when Amish Tripathi penned down his trilogy series on Shiva which romanticized the character of otherwise known to be an angry and serious Hindu God and which went on to become a best seller (well almost!) though he also very well credits its popularity to his marketing skills learn in B School. It also happened again and I could relate to the beauty of this genre, when I came across Chitra Banerjee Divakaruni's The Palace Of Illusions. More so because, maybe it involved a female protagonist. 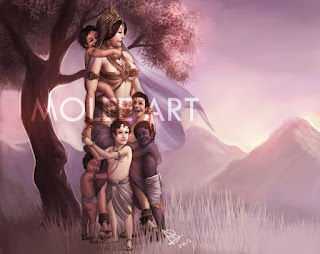 So, the book beautifully narrates the Mahabharata from the point of view of Draupadi, the character who actually shaped the story but unfortunately as a woman and the place a woman held in those times as per the Hindu Mythology, was always in a back-seat like her views. I believe, Chitra did every justice while penning down her thoughts as a princess who grew up among the prophecies around and her first person blatant honest opinions on everything from her husbands, the people around and how she unknowingly changed the course of the history throughout. Definitely a gripping read, which is surely leading me to her other works in my to do list!


“I am buoyant and expansive and uncontainable--but I always was so, only I never knew it!”