Another Champion in making

Now, I am not quite much into this area,though the driving , speed and the adrenalin factor involved always attracted me enough to be glued on TV sets on weekends ,when at home.However, I slowly lost whatever interest I had in it maybe due to two main reasons I could count for:
1.No more access in my hostel,as the common room TV which when in a mood to play,plays only what the majority wants & I under no circumstances come under this majority,forget about my races .
2.No more Schumi...yeah now I was a schumi fan ...off course he made the game so much predictable yet it had its own attraction worth watching.
Yet the recent happenings in McLaren itself has made it all quite interesting to follow.With Hamilton's advantage over Alonso in Japan, making him so near towards being a World Champion that too in a rookie season,it makes the coming Shanghai race a much-awaited one .Surely, Alonso wouldn't have expected this after Schumi. 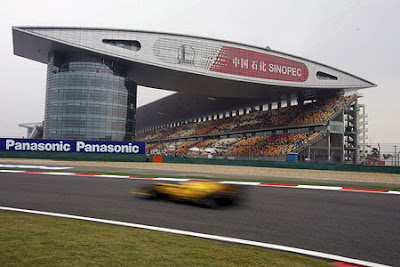 Wondering what will it be like watching the live race, a life-time opportunity I must say...maybe someday..!!!!!!