We are already very much into World Cup 2011 but there hardly seems to be much enthusiasm about it anywhere around me except the initial opening ceremony & all the 1st day fuzz around Bangladesh. Don't tell me WC 11 too is a victim of being too predictable with the same teams reaching the top & winning it too.Of course,I am among those group of believers that will consider WC interesting only if the Ozzie don't reach the top 4 or even better top 6. Or is it because of the crisper T20 version of the cricket which is spoiling the fun. Well, cant be as much the reason as the former one for sure because short or long, a movies can be equally entertaining. But about the same teams reaching & playing at the top, could be an appropriate guess.Flashback into the last year & remember how the FIFA WC 10 had every one glued to its matches as the big shots were already out in the preliminary rounds. Anyway, hope we see some real action & record breaking games this time with some unexpected results as the once appu now turns into stumpy  for its cricket version ready to stump ! & also hopefully this world cup makes more news than just that of no of tickets being available for the finals ! 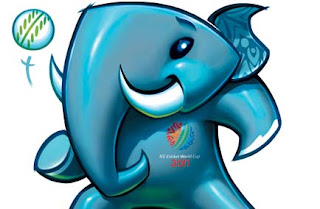 Email ThisBlogThis!Share to TwitterShare to FacebookShare to Pinterest
Labels: My Take, Sporty Mode