On a Charged Up Future Ride

Success is how you keep increasing the level of your playground and keep winning the game. Elon Musk today perfectly defines that in a beautiful way. Having founded companies that have steer headed some interesting innovations which have been changing the way things function and directly impacting the face of different industries since over 20 years now, from Zip2, PayPal, the ambitious SpaceX, Solar City to name a few and the one I am going to talk about here today that is the Tesla Motors.

Auto is one of the most traditional and core industry around us today. With huge entry barriers and highly dependent on the supplier networks of auto part manufacturer, it sees established brands which we usually see around. What Tesla Motors is trying to do with its idea of manufacturing Electric Vehicles beautifully drives us to the future disruption the industry might see. The Electric vehicle as a category has been tested and fiddled upon not just by the biggies of the industry like the Daimler and Volkswagens of the world but also by tech giants like Apple and Google (Smartphone with wheels)

With an estimated 20Mn Electric Vehicles on road by 2020, and as Tesla after successfully venturing into the premium electric category, ventures to release its low cost Model 3 in the next coming few weeks, it definitely has all eyeballs on it. 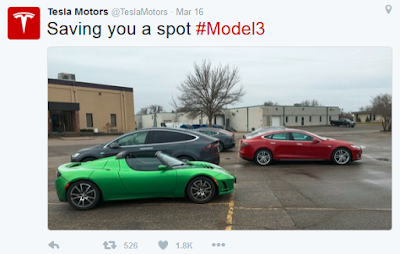 The are many factors which can make us so optimistic and bullish about it. Like, its charging stations are already outnumbering the usual Gas stations in the US. Moreover, rather than opting for the usual order the auto parts manufacturers and suppliers Musk thinks out of the box, as economist puts it below, just to name a few:
Tesla has also rewritten the economics of making electric cars. It tackled high costs by stringing together hundreds of small, mass-produced laptop batteries. Tesla claims that its power-packs cost half what big carmakers pay their suppliers for custom-designed large-format batteries, and that its Gigafactory, a huge battery plant close to completion in the Nevada desert, will cut costs by 30%.

It would be definitely an interesting industry to watch out for and see how smooth is the ride of Tesla from being premium to the common as the auto makers react to it with their own new products. As always, Consumer stands to be the winner in this charged up future ride driven by Tesla. However, the immense environmental benefits due to Co2 emission reduction, which is also the need of the hour is something which makes this a very lucrative area to watch out for!
Blah Blah by Aakanksha at 4:40 PM