A disclaimer first. I am making an assumption. It says that there is a creator and not just some random chemistry and physics involved. So when GOD created universe and started increasing the complexity of the organisms he created, he did apply some basic rules. Atoms follow a certain rule and so do the huge gravitational forces (which our Science teachers made sure we understood well, or at least pretended to in our exams) These were just the basic building blocks. The devil called details then started appearing. Things got more complex. Atoms aligned and the simple microbe we were introduced to in class 5th, developed. From ants, insects of various colors, shapes and sizes it developed to varied species of animals. And that's when an ecosystem called Jungle was created with numerous species in it. And then there were rules. Rule of the Jungle, which caused the jungle to survive. Survive, it had to in order to evolve more and bring in more complex organisms called human being. The most complex of the creations which evolved into what we call it us and that's when science started to make more sense as Darwin spoke. The rules changed but they didn't disappear. They existed. They do so even now, even if we may ignore them. They exist in our basic biology. And I am not talking about the rules created during the development of societies or the one in which you might find yourself living it. But the basic rules which helped the Jungle evolve and which will eventually enable us evolve as well.

So when in our real world around , we see people talking about choosing your battles wisely, it's the same fight and flight rule they are talking about. Wherever you are, or whatever situation it might be, things narrow down to pretty basic things - you either fight it or flight from it. What I mean is that we might be living in a corporate and society jungle now but the basic rules remain. It creates all the difference, coz' you never want to waste your time in fighting for something not worth it and you never want to flight when it's time to really give it a fight. 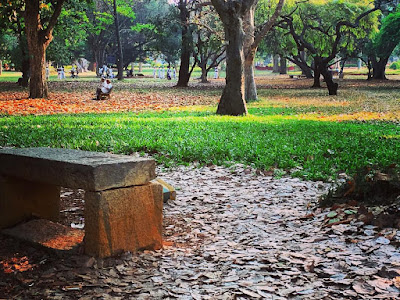 I am not among the wise ones to know and understand these rules completely. No one is. However, we do are (at some point atleast) fortunate enough to understand and acknowledge the existence of basic rules which are shaping us and the ecosystem around. Saves a lot of time (to pen down posts like these?!) Akin to the force of gravity which is making Earth orbit the Sun. These rules have been misused when the Pigs from George Orwell's Animal Farm, start making the rules of their own like in a typical case of a socialist society. I am not talking about those. I am just restating that getting back to the basic helps to understand the rules of the jungle and navigate even in the present day. The analogy might totally surprise you, if you observe it on a day to day basis in your own life!

That was just too much of Gyan (unnecessary knowledge session) for a weekday
Blah Blah by Aakanksha at 1:41 PM